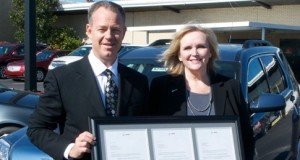 Keith Hudson, President of Jim Hudson GMC, receives the award for being the top GMC dealer in the state from Elizabeth Johnson from GMC.

For almost 30 years, Jim Hudson GMC has been the premier GMC dealership in the city of Columbia, South Carolina.  From the days of old C/K-series pickups to the new heavy-duty Sierra pickup trucks, GMC has always stood for professional grade engineering that truck, van, and SUV shoppers have driven for miles around to put in their driveways and garages.  Now, Jim Hudson has been announced as the #1 GMC dealer in the state of South Carolina.

GMC was third only to Buick and Cadillac in increased sales nationwide for 2010, thanks to a combination of a recovering economy and a series of new models that attracted the interest of Columbia’s truck and SUV owners including the GMC Terrain, GMC Acadia Denali, and GMC Sierra HD.

The GMC Terrain was introduced for 2010 as the smaller of GMC’s unibody SUVs, the second one in the brand’s history after the GMC Acadia’s arrival in Columbia SC for 2007.  Riding on the global Theta platform, GMC Terrain offers South Carolina drivers the choice of four-cylinder power making an EPA-estimated 32 highway miles per gallon or a powerful V6 engine with the ability to tow up to 3,500 pounds when properly equipped.  Combined with standard equipment including a rearview camera, USB port input to the audio system, power heated mirrors, tinted rear windows, and an auto-dimming rear mirror, Terrain has been in short supply in the state of South Carolina thanks to tremendous demand even in spite of production increases at its plant in Ontario, Canada.

Released as a 2011 model, the GMC Acadia Denali brings luxury equipment to a crossover vehicle for the first time.  The GMC Acadia Denali available in Columbia SC features a unique front and rear fascia featuring the signature Denali grille along with exclusive two-tone 20-inch chrome wheels.  With standard trailering equipment (and the heavy-duty cooling system that comes with it), heads-up display, dual skyscape sunroof, and power rear liftgate, the GMC Acadia Denali lives up to the functionality-meets-luxury design of the Denali name.

Though only mildly restyled outside and looking very similar inside, the GMC Sierra Heavy Duty pickup trucks that were introduced in 2010 as 2011 models have raised the bar significantly for three-quarter-ton and one-ton pickup trucks.  Beneath the skin, Sierra HD rides on a completely new frame that is 92% stronger than the outgoing 2010 model and features massive 14-inch brake rotors to reduce brake fade when moving heavy loads.  A redesigned section in the rear makes installing most popular fifth-wheel and gooseneck hitches easier than ever, which allows South Carolina truck owners to take advantage of Sierra HD’s available 21,700-pound maximum trailer weight rating.

Of course, none of this matters if the service received at the dealership is no good.  Ever since opening the doors in 1980, Jim Hudson’s first and primary goal has been a completely satisfied customer.  The commitment to customer service Jim Hudson GMC demonstrates has been noted in the Columbia area, as Jim Hudson has been voted Best New Car Dealership in Columbia an unmatched ten years and counting by readers of The State newspaper.  As the #1 GMC dealer in South Carolina, Jim Hudson is excited to be able to serve even more GMC customers in 2011 and encourages all truck and SUV shoppers in South Carolina to come see why people love GMC’s exceptional lineup.  Jim Hudson GMC is located at 7201 Garners Ferry Road in Columbia, and can be reached at (803) 783-0110.  For more information, visit their South Carolina GMC Dealer website.